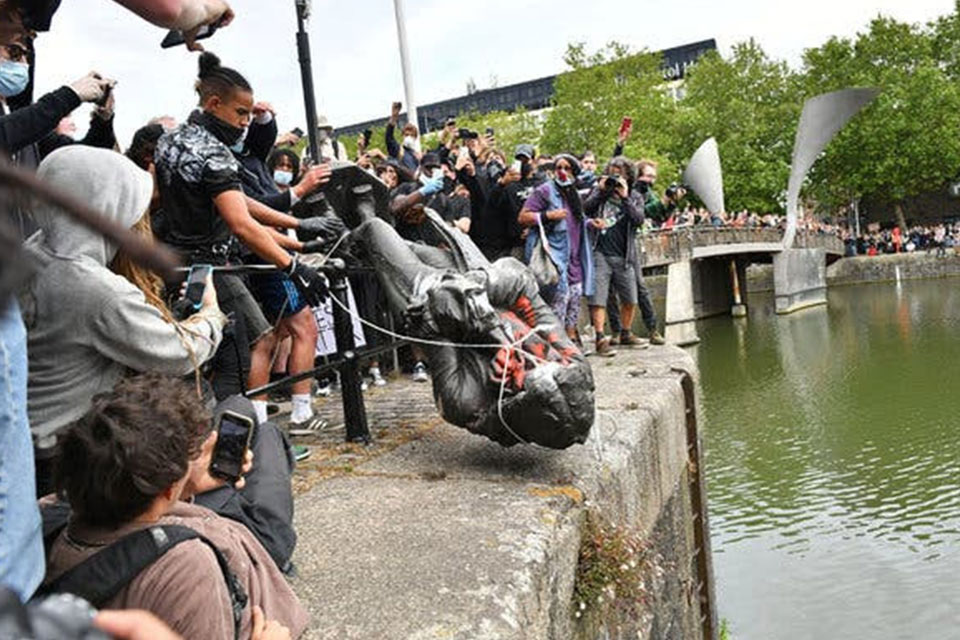 Protesters threw a statue of the slave trader Edward Colston into Bristol harbor during a Black Lives Matter protest in June.Credit…Ben Birchall/Press Association, via Associated Press.

LONDON — Jen Reid had never marched in a Black Lives Matter protest before she took to the streets of Bristol, England, on June 7. By the end of that angry day, she had clambered up to stand in the place of a 17th-century slave trader, whose bronze statue had been pulled down and dumped in the city’s harbor.
The image of Ms. Reid, her fist clenched, her right arm thrust upward in a gesture of defiance, spread widely on social media. For many, it seemed the perfect replacement for the notorious merchant, Edward Colston — a flesh-and-blood rebuke to the trader’s cruel legacy, which still hangs over modern Bristol.

At dawn on Wednesday morning, Ms. Reid was up there again in the form of a resin-and-steel sculpture by Marc Quinn. A prominent British sculptor known for his provocative works, Mr. Quinn said that when he saw the image of Ms. Reid on the plinth, he sensed the opportunity for an act of guerrilla art.

He got in touch with Ms. Reid and proposed a clandestine project, in which she would pose for a sculpture that he would install where the Colston statue had stood. Working with a team of 10 people, Mr. Quinn swiftly erected the piece without the approval of city authorities. How long it will be allowed to stay there was not clear.

“She created this iconic image,” Mr. Quinn said in an interview. “I’m just amplifying the moment she created.”

He said he viewed the sculpture as a complement to the protests, one that he hoped would provoke debate about “how we commemorate people in statues.” While he said he did not expect city officials to leave the work in place permanently, he hoped they would leave it long enough to prompt a conversation.

Ms. Reid, who works as a fashion stylist, said she found it “surreal” to have an artist memorialize her spontaneous decision to climb up on the plinth, a moment she recalls with a mix of exhilaration and fear, given her worries about falling off.

“Looking back on that moment, it just gives me goose-pimples,” she said. “Marc has just captured all of it in the statue.”

Even before that moment, Ms. Reid said she had misgivings about going to the march. She is taking care of aging parents and was worried about the risk of contracting the coronavirus in the crowds. But her outrage at the murder of George Floyd at the hands of the police in Minneapolis overrode her trepidation, she said, and she decided to go, even buying a black beret and glove for the occasion.

Ms. Reid and her husband, Alasdair Doggart, listened to speeches before joining a march to the site of the Colston statue. After they watched the crowd tear it down and dump it in the water, the couple returned to the empty plinth, where — helped up by Mr. Doggart — she stood on the plinth and struck her pose.

“It wasn’t as easy as it looked because it was a lot higher than I thought it was,” Ms. Reid said. “My legs were jelly. It was a slow rise, but when I stood up and raised my fist, the crowd cheered like crazy.”

Mr. Doggart snapped a photo, which he posted on his Instagram account. The next morning, after a colleague of Mr. Quinn’s showed it to him, he called Ms. Reid and proposed the project. She traveled to a film production studio outside London and recreated the pose for Mr. Quinn, who arrayed 200 cameras to shoot her from every angle.

After he made a three-dimensional scan, Mr. Quinn created the sculpture from resin. Working in bronze, he said, would have added several months to the project, and he wanted to install the piece while memories of that day were fresh.

Mr. Quinn is part of a cohort of British visual artists, known as Young British Artists, or Y.B.A.s, who came to prominence in the 1980s. The group, which includes Damien Hirst and Tracey Emin, is known for the shock value of their works, like Mr. Hirst’s display of a shark preserved in formaldehyde.

Mr. Quinn’s best known work is a cast of his head, made from his own frozen blood. He also drew attention for a marble sculpture, “Alison Lapper Pregnant,” which depicted a woman with a condition that left her with no arms and shortened legs. It was placed on a plinth in Trafalgar Square in London from 2005 to 2007.

“I’m interested in how society is moving, and bringing it into the world of art, which is kind of antiseptic,” Mr. Quinn said. “It’s because I’m a successful artist, I can get this up. It’s a temporary sentence in the conversation.”

The debate over what should permanently replace the Colston statue has percolated since last month. Historians have suggested a statue of Paul Stephenson, a Black activist who organized a successful boycott of a Bristol bus company in the 1960s. A mannequin of Jimmy Savile, the disgraced BBC television host — dressed in a blonde wig and neon tracksuit — was placed on the plinth for a few days.

As for the statue of Colston, Bristol’s mayor, Marvin Rees, ordered it fished out of the harbor and stored for safekeeping while the public debates what to do with it. It is likely to end up in a local museum that has an exhibit about Bristol’s links to the slave trade.

Mr. Rees has gotten plenty of other suggestions already.

Banksy, the elusive street artist who became famous for his graffiti paintings on the sides of buildings in Bristol, posted a sketch on Instagram of a proposed memorial depicting Colston in the act of being toppled, with protesters tugging on ropes around his neck.

For Ms. Reid, a descendant of Jamaican immigrants, the debate over the statue symbolized Bristol’s reluctance to confront the sinister past of one of its biggest benefactors. Colston’s name is still on a school, a performing arts center and several other institutions in the city, though some are in the process of removing it.

“I walked past his statue every day for the last five years,” she said. “It’s an effrontery to have a slave master you have to walk past everyday.”

Ms. Reid said she had no idea whether the city would let the statue of her stay in place for several months — or a single day. But she confessed to being tickled about being a part of Bristol’s urban landscape in a time of social change.

“I’ll tell people to meet me by my statue,” she said laughing.