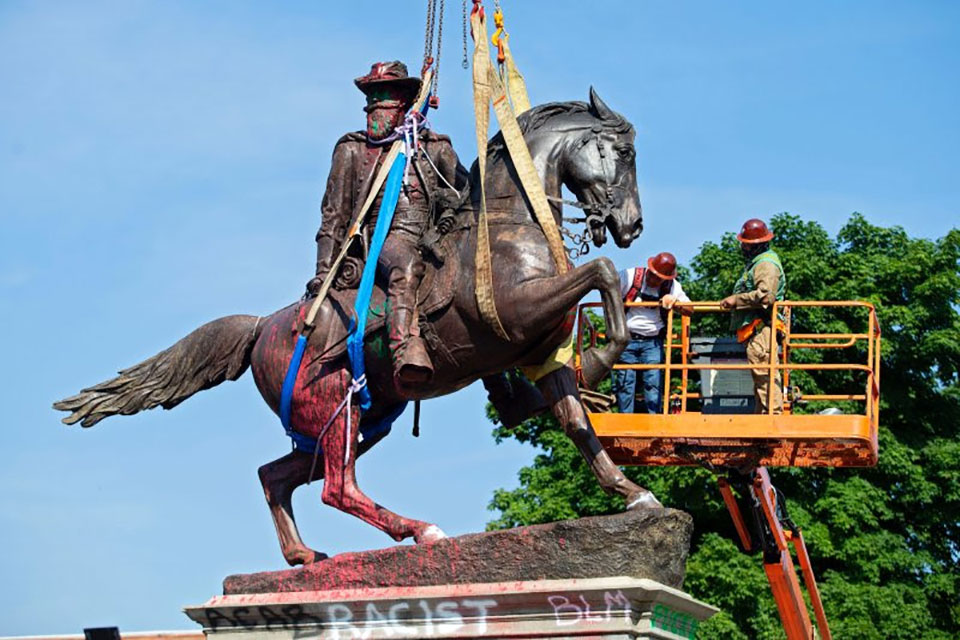 When we look back on 2020, the emblematic photos of the year will undoubtedly include images of crowds gathered around toppled, spray-painted statues. The indictment of these monuments has focused the country’s attention on how the history of slavery in the United States casts a long shadow that stretches all the way from the Middle Passage and Jim Crow to the protracted record of police violence against African Americans that led to the Black Lives Matter movement in the first place.

The histories of slavery and racism in the United States have never been more pertinent. This is also the case for the comparatively understudied history of race as a concept, without which it is impossible to understand how Europeans and their colonial “descendants” in the United States engineered the most complete and enduring dehumanization of a people in history.

The logic behind the history of race initially seems deceivingly clear: to justify the forced deportation of 400,000 Black Africans to North America (and another eleven million to other parts of the Americas between 1525 and 1866), Europeans and their American heirs found it necessary to debase and revile their captives. Yet today’s racism is more than a malignant byproduct of the 19th-century American plantation system; it also grew out of an elaborate and supposedly “scientific” European conception of the human species that began during the Enlightenment.

By the early decades of the 18th century, the Continent’s savants and natural philosophers no longer automatically looked to the Bible to explain the story of the human species. Intent on finding physical explanations for natural phenomena, naturalists employed more “empirical” methods to solve one of the biggest “anthropological” questions of the day: why did people from Africa, millions of whom were already toiling in European plantations, look different from white Europeans?

By the 1740s, one could find a dozen or more purportedly scientific explanations. Some claimed that blackness came from vapors emanating from the skin; others claimed that black skin was passed on from generation to generation via the power of the maternal imagination or from darkened sperm; still others asserted that the heat or the air of the Torrid Zone darkened the humors and stained the skin.

The dominant “anthropological” concept that emerged around 1750 was called degeneration, which can be understood as the precise opposite of what we now know to be true about humankind’s origins. In contrast to the model that shows how evolution and successive human migrations from the African continent account for humanity’s many colors, degeneration theory maintained that there was an original and superior white race, and that this group of humans moved about the globe and mutated in different climates. These morphological and pigmentation changes were not seen as adaptations or the results of natural selection; they were explained as a perversion or deterioration of a higher archetype.

Medical practitioners stepped in to flesh out that vague narrative, creating the basis for the idea of what we now call race. Anatomists, in particular, dissected the bodies of supposedly degenerated Africans, and published numerous now-shocking articles on the supposed damage of living in a tropical climate: black brains, black bile, black sperm and even race-specific black lice.

The most bigoted of European physicians attributed specific organ-based liabilities to Black Africans, including indolence and diminished cognition. Not surprisingly, these falsehoods and the methods that produced them flourished in the United States: in 1851, Samuel A. Cartwright identified two “diseases” associated with Africans. The first was a mental illness he dubbed drapetomania, which caused slaves to run away. The second was dysaesthesia aethiopica, a type of lethargy that struck Africans who were not enslaved or overseen by whites. His cure: anointing them with oil, and applying a leather strap.

Europe also bequeathed Americans with the very category of “race.” By the 1770s, German figureheads including Emmanuel Kant and J.F. Blumenbach—the latter of whom coined the term Caucasian because he believed that the original prototype race originated in the Caucus Region—affirmed that new biometric and anatomical discoveries justified the use of the modernistic word race to distinguish among human subspecies.

Racial classification schemes provided the most powerful framework for understanding the divide between white and Black. Some naturalists took this one step further, proposing that Africans actually formed a different species entirely. Predictably, this latter idea was adopted by some members of the proslavery lobby in the United States.

Progressive thinkers, abolitionists and, eventually, formerly enslaved people including the writer Olaudah Equiano began critiquing the roots and effects of racial prejudice as early as the 1770s. And yet, even as scientific research has confirmed just how wrong Enlightenment theories of race were, many of the most rearguard and unscientific European notions regarding race have remained deeply embedded in the American psyche, not to mention in the arsenal of the Alt Right. Indeed, the immigration policies of the Trump Administration, in insisting that immigrants from certain countries are less desirable than others, are effectively resurrecting centuries-old notions about the supposedly deterministic nature of race.

Racialized thinking, especially when weaponized by our politicians, must be repudiated at every turn. Part of an effective rebuttal to such malicious positions may come from extending our understanding of racism to include the anecdotal, spurious and pseudoscientific birth of these ideas centuries ago. This may ultimately be something that every American can agree on: wherever we come from, we are all the unfortunate heirs of a deadly and illegitimate science.

Andrew Curran is the author of The Anatomy of Blackness: Science and Slavery in an Age of Enlightenment and, more recently, Diderot and the Art of Thinking Freely. He is the William Armstrong Professor of the Humanities at Wesleyan University.