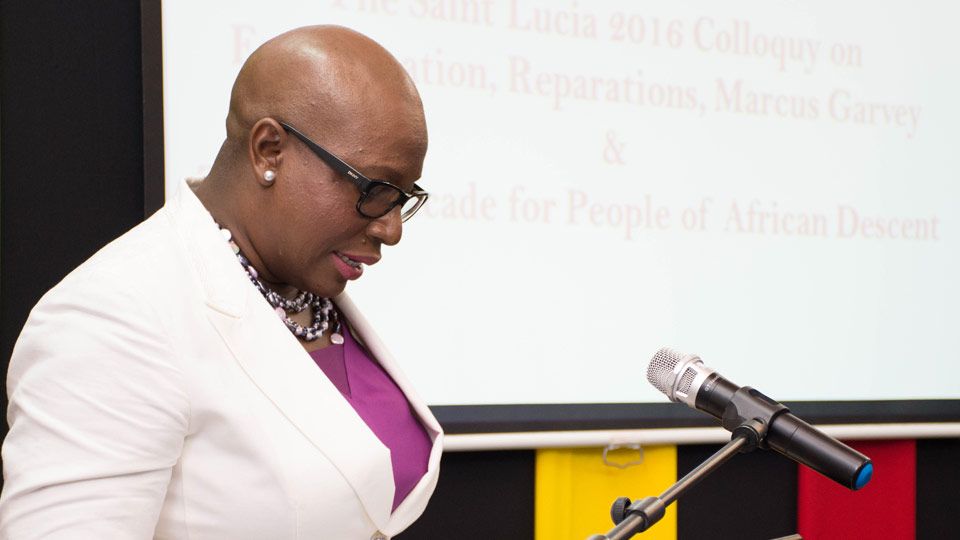 The Acting Prime Minister spoke following her presentation of an official declaration adopting the UN Decade last week, during a Colloquy on Slavery and Emancipation, Reparations, Marcus Garvey and the UN Decade for People of African Descent.

The event, held at the UWI Open Camps Saint Lucia on August 17th, was organized by the Saint Lucia National Reparations Committee (NRC). Dr Rigobert, who is also minister responsible for Innovation, Gender Relations and Sustainable Development, said her government stands by to observe the relevant protocols the country adopted when the decade was launched at the UN in New York last year.

Speaking before reading the declaration, the Acting Prime Minister said she was also proud to have been part of the historic event, which also observed the 129th Birthday of Marcus Garvey, launched a Reparations Lecture Series and saw the passing of the CARICOM Reparations Baton from Guyana and Surinam to Saint Lucia. Dr Rigobert traced the history of the UN’s adoption of the Decade back in 2013, when the General Assembly agreed to observe the decade from January 1¸201 to December 31, 2024. The Acting PM also reiterated Saint Lucia’s commitment, within its means, to implement the agreed UN resolution.

At the 68th Session of the General Assembly, member states of the United Nations adopted Resolution 68/237 in December 2013, through which the International Decade for People of African Descent was proclaimed, commencing January 01, 2015 and ending December 31, 2024. The decade was proclaimed under the theme “People of African Descent: Recognition, Justice and Development” and was to be officially launched following the general debate of the 69th session of the General Assembly.

The President of the General Assembly was requested to facilitate the continuation of consultations with members and other stakeholders towards the elaboration of a programme for the implementation of activities to achieve the objectives of the international decade. The resolution further called for the allocation of predictable resources for funding the implementation of the programme of action and activities from the regular budget and extra budgetary resources of the United Nations.

With the desire to commence the process to give effect to the resolution and to officially launch the International Decade for People of African Descent, the Government of Saint Lucia makes the following declaration:

The Government of Saint Lucia, having supported Resolution 68/237 proclaiming the International Decade for People of African Descent under the theme “people of African descent: recognition, justice and development”;

Aware that in many cases the situation of people of African descent remains largely invisible with insufficient recognition and respect given to their efforts to seek redress to alleviate their present condition;

Conscious that access to justice and in particular reparatory justice are important elements in any initiative(s) in addressing the condition of people of African descent;

Convinced that recognition of their rights to equality, non-discrimination, participation and inclusion are critical factors in any programme to improve the conditions of people of African descent;

Cognisant that an understanding of their particular historical circumstances underscores that special attention ought to be given to people of African descent;

Mindful that development programmes, measures to combat poverty, access to education, employment, health care and adequate housing are integral to addressing the peculiar conditions of people of African descent;

Re-iterating that the Universal Declaration of Human Rights confer inalienable rights to all human beings including persons of African Descent;

Determined that addressing the conditions of people of African descent requires actions at national and international levels;

Launches the International Decade for People of African Descent in Saint Lucia and declares its commitment, within its means, to support the implementation of the Programme of Action agreed at the United Nations.