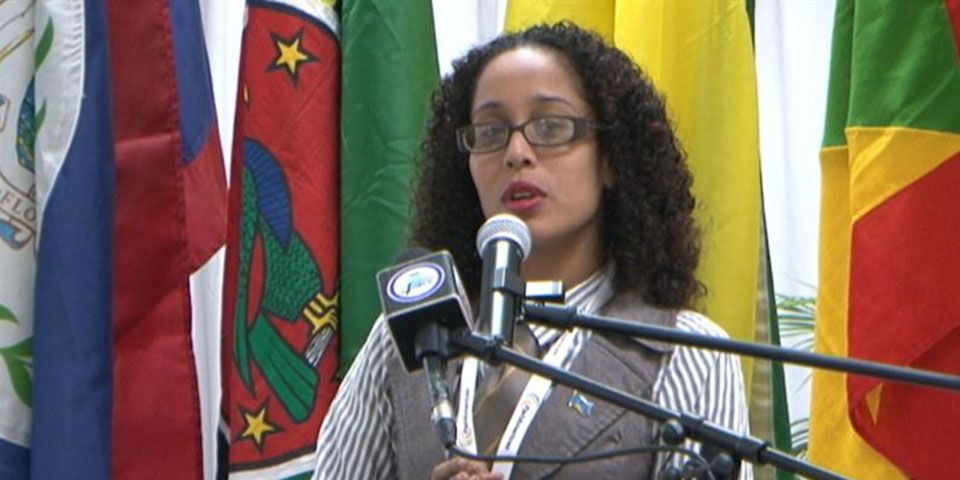 Alisha Ally, a senior staffer at the Government Information Service (GIS), will serve as Saint Lucia’s CARICOM Youth Ambassador for the next two years — and one of her first assignments is assisting the Saint Lucia NRC to host the inaugural CARICOM Reparations Baton Relay planned as part of 2016 Kweyol Heritage Month observances here.

The Relay will end in a Youth Rally planned for the same day on Derek Walcott Square in the capital, Castries.

The theme for the youth rally is “Pani Devloppman San Jistis – Wepawasyon Se Pou Nou Tout!” (“No Development Without Justice – Reparations Is For Us All!)

The Relay and Rally are expected to attract participation by youth and student organizations island-wide and both will feature the CARICOM Reparations Baton.

During her two-year stint here, Ms. Ally will generally assist CARICOM with integrating the perspectives of young people into national, regional and international policy. The CARICOM Youth Ambassador Program was launched in Saint Lucia in 1993 by the Heads of Government, to mark the regional grouping’s 20th anniversary and was formally instituted in 1994.

Since its inception, the Youth Ambassador Program has contributed to increased youth knowledge and awareness of CARICOM issues and priorities, while working towards raising the profile of young people at the national and regional levels. Appointed September 16, 2016, Ms. Ally is ecstatic about her new assignment.

Interviewed by colleagues after the announcement, she said she’s been “involved in the youth movement and the volunteer youth sector for ten years now,” and “I thought it was about time I elevated my level of advocacy and my contribution to the youth movement — and I am quite pleased to have been selected.”

The new youth envoy aspires to make a valuable contribution to regional policy.

She says, “I expect it to be a lot of work, because CARICOM deals with a lot of policy objectives not just for one country but for the entire region. “I am hoping to make a valuable contribution—especially for the youth demographic—to whatever plans and programs that CARICOM already has in place and wants to put in place.”

Ms Ally says, “I anticipate that the advocacy that I will be engaged in will not be any different than I have done in other positions.”
She points out that she has “always been a strong advocate on various issues that affect our young people, because, for me, all issues are youth issues and we should not just boil it down to certain categories like ‘unemployed’ and ‘crime-prone’, etc.”

Ms Ally expects to continue advocating and plans “to be able to enact some level of change through the policies and programs of the CARICOM Secretariat.” Meanwhile, Ms. Ally has a page in local history: according to the GIS, she is the youngest — and only female — Saint Lucian and the second Saint Lucian (after late eminent jurist Sir Vincent Flossaic) to speak at the House of Lords. That also makes her the only Saint Lucian alive with that fitting tribute.