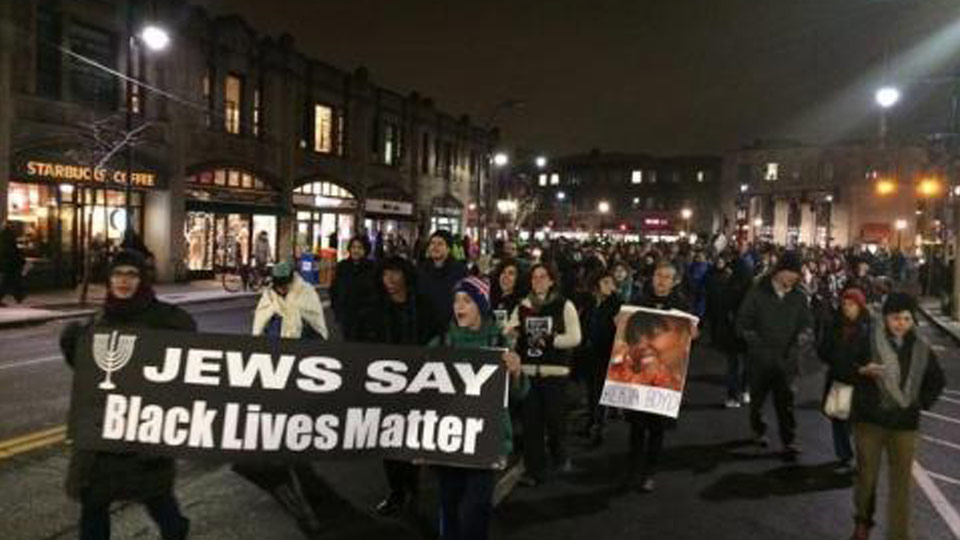 The Black Lives Matter movement’s advocacy for Palestinians has caused a rift to open over Israel between younger and older American Jews, and there’s no sign of it mending any time soon.

This week, activists from Jewish Voice for Peace and other groups stood behind Black Lives Matter while more conservative parts of the American Jewish community condemned the movement after it criticized Israeli policies towards Palestinians, which it characterized as “genocide,” and endorsed the Boycott, Divestment and Sanctions (BDS) movement in a newly-released platform titled “Vision for Black Lives.” It’s the latest example of how the growing Palestinian rights movement has driven a wedge in the American Jewish community. The controversy follows familiar pattern, activists say, of punishment for disloyalty to Israel.

In its platform, Black Lives Matter called for the U.S. government to stop supplying military aid to Israel, which it uses to further the occupation of Palestinian territory. The statement from the Movement for Black Lives, signed by dozens of affiliated groups, framed the question as an issue of civil rights just as it does its own movement.

“The US justifies and advances the global war on terror via its alliance with Israel and is complicit in the genocide taking place against the Palestinian people,” the statement read. “Israel is an apartheid state with over 50 laws on the books that sanction discrimination against the Palestinian people. Palestinian homes and land are routinely bulldozed to make way for illegal Israeli settlements. Israeli soldiers also regularly arrest and detain Palestinians as young as 4 years old without due process. Everyday, Palestinians are forced to walk through military checkpoints along the US-funded apartheid wall.”

The statement elicited outrage from groups like the Jewish Community Relations Council of Boston, which said in a statement on Wednesday that it planned to “dissociate” itself from Black Lives Matter.

“To conflate the experiences of African-Americans and Palestinians oversimplifies complex matters and advances false equivalencies that diminish the unique nature of each,” read the statement, signed by JCRC Boston President Adam Suttin and Executive Director Jeremy Burton. “JCRC cannot and will not align ourselves with organizations that falsely and maliciously assert that Israel is committing ‘genocide.'”

While it pursued “dissociation” from Black Lives Matter, the group said it would still support racial equality and fair policing in the United States.
“As we dissociate ourselves from the Black Lives Matter platform and those Black Lives Matter organizations that embrace it, we recommit ourselves unequivocally to the pursuit of justice for all Americans, and to working together with our friends and neighbors in the African-American community, whose experience of the criminal justice system is, far too often, determined by race,” adding that black Americans in remain “cherished partners here in Boston, a community that has staunchly supported Israel’s existence and rights as a nation.”

The Black Lives Matter platform also received push back from more left wing groups than JCRC, including T’ruah: The Rabbinical Call for Human rights. They too bristled at the word “genocide,” saying that while what Israel does to Palestinians is worthy of condemnation, it doesn’t qualify as “genocide,” a punishable criminal violation of international humanitarian law.
Israel’s “military occupation does not rise to the level of genocide—a term defined as ‘the intent to destroy, in whole or in part, a national, ethnic, racial or religious group.’ While we agree that the occupation violates the human rights of Palestinians, and has caused too many deaths, the Israeli government is not carrying out a plan intended to wipe out the Palestinians. There is no basis for comparing this situation to the genocides of the 20th century, such as those in Bosnia-Herzegovina, Rwanda, or Armenia, or the Nazi Holocaust in Europe, each of which constituted a calculated plan to destroy specific groups, and each of which killed hundreds of thousands to millions of people,” the organization’s statement reads.

To Jewish American activists working for Palestinian rights, these kind of statements bear a hypocrisy that will further alienate them from what they call the Jewish American Establishment.
Two young women, part of IfNotNow, an anti-Occupation protest group that staged a protest at ADL’s offices over Passover, identified JCRC with the Establishment that they say is putting roadblocks to peace and human rights between Israelis and Palestinians, and now in the United States.

“JCRC’s statement distancing itself from the Movement for Black Lives because that movement dares to criticize the Israeli occupation provides further evidence of how out of touch the leadership of the American Jewish establishment truly is,” wrote Ally Little and Michelle Weiser in an opinion piece for the Forward titled: “Don’t like Black Lives Matter? Get ready to lose young Jews like us.” “JCRC is obstructing racial justice work, erasing black Jews, and attempting to maintain a status quo of Jews who are progressive on all issues except for Palestine,” they added.

Rabbi Brant Rosen takes on the T’ruah statement, which he says he finds, “much more disturbing than the one released by the Boston JCRC. While the latter group has always sought to counter the growth of the BLM movement, T’ruah purports to stand in solidarity with them.” Rosen continues, “T’ruah does not give the BLM ‘the benefit of the doubt’ when it issues an immediate counter-statement such as this; tantamount to a group in a position of power saying to an oppressed group, ‘we will stand in solidarity with you but only on our terms.'”

One striking contrast between the words of JCRC and of the activists is that they recognize that some Jews in the United States are people of color too, while JCRC treats the two groups as separate. Jewish Voice for Peace, another activist organization that marched with Black Lives Matter in Philadelphia last week during the Democratic National Convention, said it both endorsed the platform “without reservation,” and was starting to work with Jews of Color in Solidarity with Palestine, another group. The JVP statement says, “These Jewish organizations are rejecting a thorough and inspiring transformational set of policy ideas developed by a broad coalition of Black leaders simply because these Black leaders have explicitly linked the experiences and struggles of Palestinians with their own.”

In their statement, JVP recognizes its own leadership is made of European, Ashkenazi, Jews. and was modifying its tactics with that in mind.
“Because the leadership team of JVP is currently all white Ashkenazi Jews, we are slowing down to ensure our members who are Jews of Color can lead the way, particularly in matters of racial justice,” the statement reads. “This is part of our ongoing project to dismantle white supremacy inside of JVP.”
Jewish people advocating for civil rights of people of color is nothing new in American politics. Indeed, two Jewish civil rights workers, Andrew Goodman and Mickey Schwerner, both New Yorkers, along with black Mississippian activists James Chaney, were executed and buried by the Ku Klux Klan in Philadelphia, Mississippi in 1964. Their crime was attempting to register black voters, a direct challenge to White supremacy in the state.

At that time, however, Jewish identity in the United States had not become entangled with loyalty to Israel, and the Israeli occupation of the West Bank and Gaza Strip had not even begun. That occupation, Black Lives Matter activists say, resembles what they see in their own communities in the U.S. That the word “genocide” would find its way into the language of their criticism of these repressive policies is not surprising. Indeed, one Chicago police reform group is called “We Charge Genocide.” But that word, one that had to be invented after the holocaust to describe the monumental crime, elicits outrage from groups who stand by Israel and dismiss criticism against the troubled Middle Eastern country as not recognizing the “complexity” or the situation.
“By dismissing the entire platform over its critique of Israel, JCRC is complicit in perpetuating both racism and the occupation while standing in the way of black liberation,” write Little and Weiser in the Forward.

“The Jewish community can’t keep boasting about our involvement in the civil rights movement while giving half-hearted support to the civil rights movement alive in our streets today. We can’t let the knee-jerk dismissal of any criticism of Israel force white Jews to choose between being part of the Jewish community and standing with black lives,” they write.

Amid all this, Jews of color have to navigate a world in which Ashkenazi Jews typically occupy positions of privilege in American society, just as white Christians do. The Ashkenazi Jewish establishment, as identified by JVP and others, is now having to start answering to Jews who do not consider themselves white.

Rachel Angel, 25, is an American Jew from Miami, and part of IfNotNow. She is of Sephardic descent, and her grandparents, spoke Ladino, a melange of Hebrew and Spanish.
The holocaust killed most of the people in the Jewish village Thessaloniki. When they came to Coney Island, Russian Jews denied their Jewish identity. With tan skin, she gets questioned about her Jewish bona fides.

“I guess it I just feel like I don’t fit in anywhere,” she said. “Because I feel like in a lot of ways Jews have become ‘White’. People question me about my ethnicity.”
Angel added that, beyond skin color, allegiance to Israel has become the barometer for legitimacy as a Jew, at least in the eyes of the Jewish establishment. That sentiment trickles down to personal relationships too. Angel cited dissenting Jews like Bernie Sanders and Simone Zimmerman as examples of victims of a “witch hunt” by Jews against fellow Jews.
“It’s happened to me. I’ve lost friends for being vocal about my values,” she said. Hardest is the contradiction between Jews proudly wearing the patch of social justice advocacy, but not extending that to Palestinians. Angel feels it is hypocritical to pay lip service to civil rights for black Americans, but not extend that same sympathy to Palestinians, especially when Jews have suffered so much under white supremacist systems themselves.

“It puts you in a cognitive dissonance. I didn’t grow up being ‘white’,” she said. “I also don’t really identify as a person of color, but I also don’t identify as white,” she explained.

“I feel like I can’t stand with these racist-ass people when the tribalism gets pushed so far because of this obsession with Israel.”

JCRC did not reply to a request for comment for this article.