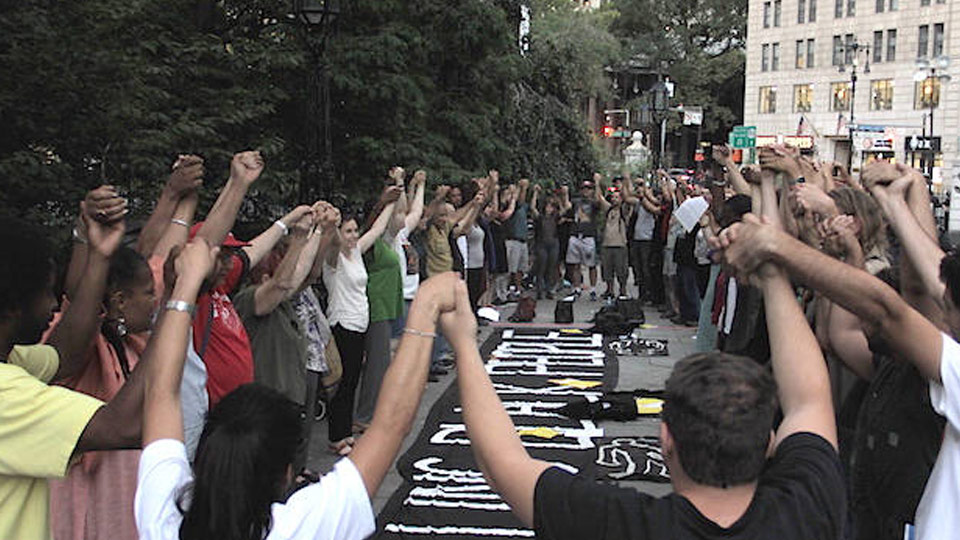 Revolution is in the air again in New York City.

Five years after the launch of Occupy Wall Street, activists have begun a new occupation. This is not Occupy 2.0, however. This protest, stationed at a park across from City Hall in lower Manhattan, was organized by the Movement for Black Lives.

On Aug. 1, activists built an encampment at City Hall Park, using the name #ShutDownCityHallNYC. They have dubbed the reclaimed space Abolition Square.

“Our goal is to accelerate a split in the Movement for Black Lives between reform and abolition, and to make that split public,” explained Joel Northam, a member of Millions March NYC who co-wrote the Shut Down City Hall NYC orientation guide.

“We are abolitionists, not reformists,” Northam emphasized to Salon. “And we will continue the occupation until they meet our demands.”

The activists have three primary demands.

First is an end to “Broken Windows” policing. This is a strategy that was spearheaded by former departing NYPD Commissioner Bill Bratton. It targets low-level crimes and minor infractions in an ostensible effort to stop larger crimes. In practice, it has very disproportionately targeted communities of color and poor people, effectively criminalizing their lives.

The protest orientation guide noted that Broken Windows is reminiscent of a strategy described by Frederick Douglass in 1845, who said a slaveowner’s “plan was to whip for the smallest offenses, to prevent the commission of large ones.”

Second on the list of demands is reparations for victims of police brutality. The protesters also stipulated that the money for reparations should come from NYPD funding, and should not be taken away from other social services.

We have really highlighted the divide between reform and abolition,” Hassein said. “We want to strengthen the abolitionist voice in the Movement for Black Lives.

There is a precedent for this demand. In 2015, after years of campaigning by activists, the city of Chicago agreed to pay $5.5 million in reparations to survivors of police brutality.

Third of the demands is the defunding of the NYPD’s $5.5 billion annual budget and the reinvestment of tax dollars in Black, Brown and working-class communities.

The protesters say the NYPD is an undemocratic and racist institution. They say they want community-based forms of policing in its place that are accountable to residents.

Several groups joined the coalition to help organize the protest, but Millions March NYC was the main force behind the call.

Nabil Hassein, an organizer with Millions March NYC, has overseen logistics for the demonstration. He emphasized that all of the groups that are participating are abolitionist groups, not reformist ones.

“We have really highlighted the divide between reform and abolition,” Hassein said. “We want to strengthen the abolitionist voice in the Movement for Black Lives.”

“We have many internal political differences,” he noted, but said they are united in their push for the demands.

The demonstration has a local focus, Hassein said, but he drew ties between similar protests in Chicago and Los Angeles and beyond.

In Chicago, activists are occupying an abandoned lot across from what has been described as a police “black site,” where more than 7,000 detainees, the vast majority of whom were Black, were “disappeared.” They renamed this space Freedom Square.

At the encampment, there were also many signs, banners and chants expressing international solidarity, with Puerto Rico, Palestine and more.

Joel Northam stressed that Shut Down City Hall NYC is part of an international movement, noting that, in Puerto Rico, activists have participated in an encampment protest for months against the PROMESA bill, which will impose an undemocratic, colonial-style control board on the U.S. territory.

Nelini Stamp, an organizer and activist involved in the occupation, told Salon she was most excited about the demand for reparations.

“We are in the middle of a breakthrough on reparations,” she said. “The original sins in this country are slavery, and by extension Jim Crow,” she added, and Black Americans still have not been able to recover from these extreme, systemic injustices.

“Victims of police brutality should have reparations,” Stamp stressed. She said these reparations should come in the form of free social services.

When Stamp heard the call to action issued by Millions March NYC, she knew she had to be a part of it.

“I believe we can abolish the police state,” she explained. “We can stop police militarization.” Stamp called for more community control over police, for “allowing people to democratically control their communities.”

This police state, however, Stamp noted, did not just emerge on its own. “It is fueled by capitalism,” she said. “Corporations are making money off of cameras, LRADs, weapons and more.”

“Racial aspects need to be at the center, but capitalism must be challenged,” she emphasized. “People are making money off the killing of Black people, and we need to talk about that.”

New York City, meanwhile, is the perfect place to start, Stamp argued. “The NYPD is the largest police force in the country; we are in the belly of the beast. And Broken Windows policing has been exported throughout the country.”

Like the others, Stamp noted Shut Down City Hall NYC is not Occupy Wall Street Part II — although she supported the Occupy movement. “I love a good occupation,” she laughed, “but this is different.”

This action is part of the Movement for Black Lives, and is centered on the struggle of communities of color, she noted. “I’m excited about what this occupation brings to the conversations in our communities.”

Stamp compared what poor communities of color are living through to the novel “The Hunger Games.”

“Believe Black and Brown people when they say they don’t trust the police,” she said. “I love dystopian novels, and I feel like I’m living in one sometimes.”

Shut Down City Hall NYC has several democratic committees responsible for overseeing affairs — a logistics committee, a tactical committee and others. It holds regular meetings and assemblies where larger decisions are made.