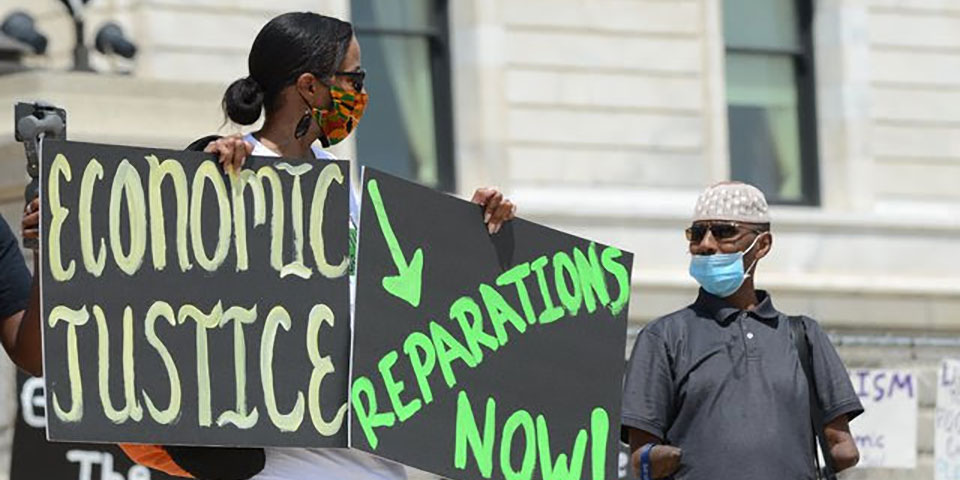 By Khury Petersen-Smith and Akua Gyamerah

The uprising sparked in Minneapolis by the police murder of George Floyd – which spread across the country and around the world – is building on and moving beyond the movements against racist policing that preceded it.

As community activists challenge officials to slash law enforcement budgets and force a serious national conversation about the utility of police departments and the prospect of disbanding them – we need to discuss the racist history that led us here.

Central to an honest assessment of that history is the extraction of wealth from the Black population, from the United States’ inception to the present. Protests toppling the statues of Confederate soldiers serve as reminders of the enslavement of generations of Black people at the founding of the country – alongside a war on the Indigenous population.

June 19th marked the 152nd anniversary of Juneteenth, when the last enslaved Africans were informed of their “freedom” two years after the Emancipation Proclamation. Yet the US government has not paid reparations for slavery or subsequent systems of racist rule since. Black Americans have demanded reparations for slavery since the institution existed. But advocates for reparations today have pointed out that the theft of wealth from Black labor and life did not end when slavery did – it continued in other forms, and is ongoing. The economic history of the United States can be narrated through the stories of that theft through violence.

Indeed, the president’s decision to hold his first campaign rally since the Covid-19 outbreak in Tulsa, Oklahoma highlights a dark illustration of this history. Tulsa was the site of a 1921 white supremacist onslaught, which involved the mass murder of hundreds of Black people and the white looting of Black Tulsa’s financial center – known as “Black Wall Street.” Until this day, descendents of those attacked have not received reparations. A similar atrocity took place in Wilmington, North Carolina in 1898, when a highly organized white mob overthrew the local government – which included Black officials – massacred Black residents, and seized Black wealth.

US history is replete with examples of racist violence and policies that have had lasting consequences for Black individuals – and collectively for the Black community. In the 1960s, when the federal government built Interstate 95 along the East Coast, five hundred buildings were destroyed in Boston to make way. This took place in the Black neighborhood of Roxbury, and the business district was devastated by the demolitions. Though protests stopped the construction of the highway through the city, there has still neither been recovery nor compensation for the losses. Federal and city governments carried out similar assaults on Black neighborhoods across the country as part of highway construction projects in the name of “urban renewal.”

These moments of injustice, however, should not obscure a greater point about the economic history of the US: the ongoing, sustained, parasitic extraction of Black wealth, often through violence. Through federal housing policies, and the predatory lending practices of banks, payday loan companies and other parts of the financial industry – corporations, municipalities, and property owners have directly enriched themselves through impoverishing Black people.

The results have been catastrophic for Black America over generations, culminating in preventable, racist disparities that render Black lives disposable. Among these have been pervasive health inequities among Black people and communities. From maternal health outcomes to asthma and other chronic health issues, Black America bears the brunt of morbidity and mortality in the US.

We are currently witnessing the devastating effects of these disparities with the Covid-19 pandemic. It is no surprise that the virus that initially affected white and affluent travelers shifted to disproportionately impact Black and Indigenous communities. Although Black Americans are 13% of the population, we make up 23% of COVID-19 related deaths where race is known. Approximately 1 in 2000 Black people have died from the virus in just a few months. Only 1 in 5 Black workers can work from home due to our concentration in the precarious, low wage service sector – or in Covid-19 parlance, “essential work” – which places us at higher risk. At the same time, extant health disparities like diabetes, hypertension, and asthma – all products of structural and environmental factors shaped by racism – lead to higher Covid-19 related mortality.

Continued racist exploitation, repression, and theft of Black wealth, life, and livelihoods have set the stage for today’s rebellions. Black Americans are dying at higher numbers due to the convergence of multiple racist health disparities, precarious work conditions, and racist policing and violence that place us at risk of illness, poverty, and death. Protests call to arrest, defund, and abolish the police. Alongside these demands is the need for reparations as redress to the centuries of racist violence and oppression.

As Black activists have before them, today’s Movement For Black Lives have called for reparations, drafting a program of restitution. Skeptics of reparations question its feasibility, asking how it would be possible to identify Black individuals who can claim to have suffered from an injustice in the far past. But, survivors and descendants of victims of atrocities like the Tulsa Massacre, which translated directly into white wealth, are alive today. Not only are reparations righteous and necessary, but examples of compensation for injustices in history and today, including in the US, show that they are possible. The US must move past deflection and excuses, and pay reparations that it owes to Black America.

Every opening congressional session over the past 30 years, Rep. John Conyers introduced HR 40 – a bill calling for a federal commission to study reparations proposals and issue recommendations – to no avail. Congress should pass HR 40 in response to today’s uprisings.

Corporations that profited from slavery should be taxed to create funds for Black communities to use towards addressing health and housing issues and environmental racism. Funds should also be invested in research and meaningful solutions to racist health disparities and their social determinants. Such corporations include JP Morgan Chase, Aetna, the New York Stock Exchange, and many others.

In the case of Covid-19 and its devastating impact on Black America, corporate employers and the public sector must pay Black and other essential workers hazard pay, and compensate the families of those who have lost their lives and livelihood due to inadequate protections for essential work.

Reckoning is needed immediately in localities that were sites of the mass violence and theft or destruction of Black wealth. Black survivors and descendants of such events need to be compensated, and wealth and other resources redistributed to Black communities that suffered in the aftermath. Such efforts would almost certainly include every city – and many towns – in the United States. Tulsa police have issued a formal apology for their role in the 1921 Massacre, but the city has yet to compensate its descendants. Chicago activists won financial and other reparations for Black survivors of police violence, offering an example for other cities.

Institutions that benefited from slavery owe the descendants of people whose enslavement produced the wealth at their foundations. Georgetown University and the Virginia Theological Seminary have offered a start by both committing to reparations funds for people whose ancestors’ enslavement lies at the base of their enduring wealth. Universities like Brown, Harvard, and Yale have acknowledged the role of slavery in their histories, and have renamed halls and removed statues honoring slave owners, but have yet to commit to financial reparations.

They should occupy Wall Street, and more recently Bernie Sanders, have popularized redistributing wealth from the 1% to the 99%. But these calls need to go further in centering racial justice. As the calls for universal reforms and redistribution of wealth gain more support, reparations must be a central component, or as history has shown, Black America will get the short end of these reforms.

As we call for reparations, we need to do so alongside demands by Native American activists for the return of land – the theft of which is also the foundation of the US economy. We must also heed international calls demanding reparations from US institutions and European colonial powers.

We are living in unprecedented times, with a global pandemic impacting along racist fault-lines, an economic recession and mass unemployment, and police state violence aimed at violently repressing Black-led dissent. In response, we not only need to abolish all tools of racist repression like the police – we also want reparations for the damages done over the centuries of uninterrupted white supremacist brutality and savagery at the heart of capitalism. Resolving these wrongs is key to building a just future.