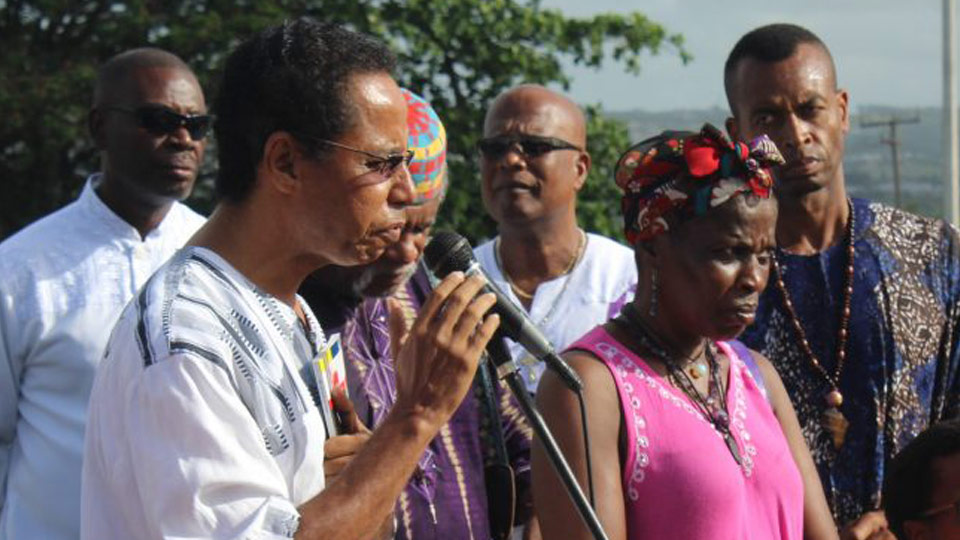 As thousands of Barbadians take to the streets today for Kadooment Day celebrations, Pan-Africanist David Comissiong reminded them of the significance of the observance of Emancipation Day on August 1st.

Addressing a rally at Bussa’s Statue at Haggat Hall, St Michael to mark the occasion, Comissiong suggested that Kadooment Day is overshadowing Emancipation Day celebrations and could have been held on another day.

The development of Barbados cannot be predicated on inviting foreign multi-national companies to come here to give them our most prized assets. That is not independence, that is not nationhood, that is not development.

“There is absolutely no reason why today could not have been reserved for the commemoration of Emancipation Day and tomorrow, Tuesday, August 2, which is already a public holiday could not have been used as Kadooment Day,” he said, charging that the Freundel Stuart administration is culturally, spiritually and politically blind.

He also criticised the recent announcement of plans to construct a 15-storey Hyatt Hotel Resort at Browne’s Beach.

Comissiong, a practising attorney, told the gathering that five years ago he was told by one of the consultants to the project that Browne’s Beach was too valuable an asset to be reserved for the people of Barbados, and must be used to attract foreign investment.

“The development of Barbados cannot be predicated on inviting foreign multi-national companies to come here to give them our most prized assets. That is not independence, that is not nationhood, that is not development.

“As Pan-Africanists we must do something meaningful and not just talk. I am putting out a call this morning. Let us resolve here, on this sacred spot in the presence of the statue of General Bussa, that we few who are gathered here are going to lead a movement over the next few weeks to resist this effort to take a national beach that is most beloved and embraced by the masses of black working class people of Barbados.”

Comissiong called on Barbadians to save the nation’s sovereignty, adding that native Barbadians are the ones who should be developing the area.

“That resource must be reserved for native Barbadians and if there is to be any additional tourism activity on that beach it must be tourism facilities that are owned by the Barbadian people and that are appropriate to the Barbadian environment, not a 15-storey hotel.

“A 15-storey hotel is twice the height of the Central Bank of Barbados. That is a monstrosity. If there is a tourism facility it must be an indigenous facility that reflects the culture, the identity and the characteristics of the Barbadian people,” Comissiong argued.

Last week Minister responsible for heritage matters, Stephen Lashley gave the assurance that construction of the hotel did not mean that the public would lose access to Browne’s Beach.