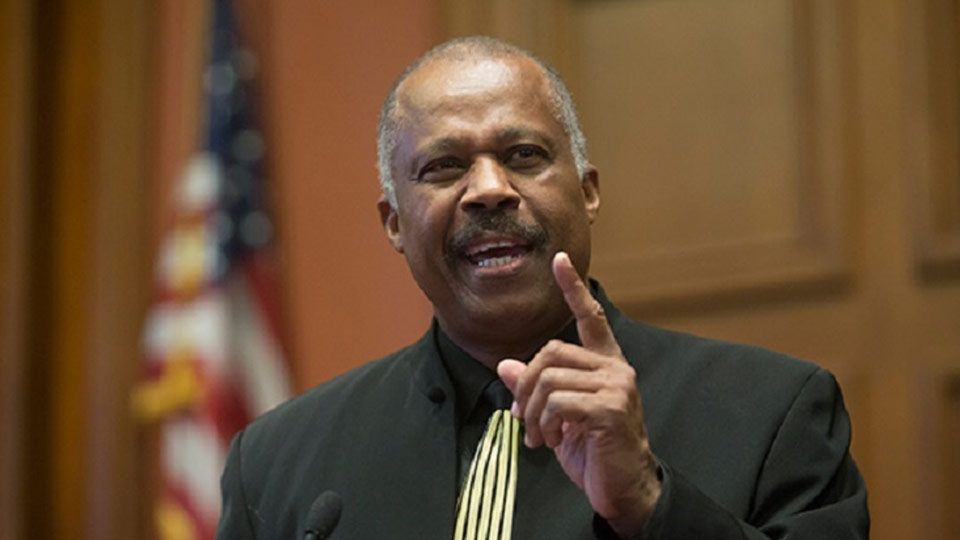 “We now need to say to the British Government development is a shared responsibility…you have a role to play in this process, come back to the table and repair the damage you have done”. Professor Sir Hilary Beckles, Vice-Chancellor of The University of the West Indies (The UWI), was speaking in his role as chairman of the CARICOM Reparations Commission, at the launch of the Trinidad and Tobago National Commission on Reparations (TTNCR) on June 13, 2015.

The audience at the Daaga Auditorium on The UWI St Augustine Campus included the Diplomatic Corps, government, First Peoples representatives, local Rastafarians, civil society and the media. The establishment of TTNCR, on February 6, 2014, conformed to a mandate from CARICOM that each member state form its own national committee on reparations.

Professor Sir Hilary Beckles described the formal launch as a seminal moment in the history of civil rights and social consciousness in the country and noted that Trinidad and Tobago Prime Minister, the Honourable Kamla Persad-Bissessar, had spoken in support of the reparatory justice process when she served as chair of CARICOM. The National Committee, he said, has much work to do in building upon the historic efforts of past organisations to bring justice to the victims of native genocide, chattel enslavement, and deceptive indentureship.

This much is known in the capitals of Europe; the only matter to be discussed at this time is how, where, and when the case should be answered.

He accepted the chairmanship of the regional Commission so as to support governments in building the case and managing the huge 21 st century diplomatic challenge, in a process that is advanced and carried out in an orderly and respectful manner. He stressed the need for Caribbean solidarity, noting that all Caribbean governments in the last 50 years have been cleaning up the mess left behind by the imperial governments. “This mess cleaning has led to heavy expenditure in social policy, creating huge fiscal deficits in most instances. Colonial powers should be sharing the burden and partnering in our heroic efforts to create sustainable Critically, he continued, reparatory justice has received very bad press over the years, driven largely by arguments coming out of Europe. The argument, for example, that native genocide, chattel slavery, and deceptive indentureship all occurred a long time ago, and cannot therefore be litigated, has won support in sections of the press and society. For this reason, he said, his leadership of the Regional Commission has focused on building the bridge between the He stated, “I have sought to reject the notion that reparations is about cash handouts, and human mendicancy. Rather, that it is about public health, education, poverty eradication, institutional and cultural racism, debt relief, and support for the repatriation of those Africans who wish to return to Africa, and support for development programs for First Nation peoples.

The cost of these development programs should be supported by European nations within the Professor Sir Hilary Beckles noted that reparatory justice is not confrontational but “must reflect a genuine interest in reconciliation, truth and justice. The region wants to put this terrible history behind it, but brushing crimes under the carpet will not serve to enhance the region’s self-respect and international perceptions of our dignity as young nations. Heads of governments have acknowledged that reparatory justice for citizens is a case that will test the resolve and vision of the finest tradition of Caribbean diplomacy”. Professor Sir Hilary Beckles acknowledged that two such experts who have keen insights and experience in matters of international diplomacy are Trinidad and Tobago’s Foreign Affairs Minister Winston Dookeran The highlight of Professor Sir Hilary Beckles’ presentation was that evidentiary basis of the case against European slave-owning nations has been established. “Europe has a case to answer”,

he said. “This much is known in the capitals of Europe; the only matter to be discussed at this time is how, where, and when the case should be answered”. He detailed the 10 point operational plan, prepared by the Regional Reparations Committee as part of the Caribbean Reparatory Justice Programme. “The case is now in the hands of CARICOM governments. Civil society has done its work over the past century, and the matter is now with CARICOM to decide on the way forward”.

The fact that reparatory justice has received bad press from the Europeans should be expected, that they would use their media, the propagana arm of white supremacy to claim that the atrocities of African slavery, native genocide and deceptive indentureship (whatever that is) happened too long ago to litigate is part of their playbook worldwide to feign ignorance when it comes to taking responsibility for their racial violence against black people to this very nano second. Some of these very states had no problem giving reparations to jewish people into perpetuity for their holocust and none of those European states, government, monarchies and descendants have any problem benefiting from the plus 400 hundred years of African slave labour to this day. They still want to shirk their responsibility for the brutalization, oppression, savagery, terrorization, rapes of African men women and children, medical tortures, the list goes on and on and they refuse to even apologize. This should show us clearly their arrogance and their mindset when it comes to black people. The chairman’s language is too soft and capitulating in this case. Reparatory justice must be confrontational despite the fact that those seeking it have a genuine interest in truth and justice because the perpetrators of the injustices refuse to acknowledge their debt, they wish to have impunity from the greatest crime in human history and their descendants are continuing that drum beat by their various nationalist and alt right movements and conservative governments worldwide. Reparations among other things mean to make whole, to repair, therefore everything should be on the table, cash handouts and everything that the chairman cited and more and the calculated cost must include pain, suffering trauma and PTSlaveD syndrome that is affecting blacks in the Carribean to this very day. These reparations should be compartmentalized to reflect each group that is affected. CDOAS (Carribean Descandants Of African Slaves) should be repaired separately since their experience was different from those harmed under indentureship. CDOAS are a people of distinction and an exceptional people who were stolen, sold or otherwise removed from their ancestoral homeland and made slaves to benefit strangers. The churches too should be held accountable for their part in that horrible crime if Europe is serious about putting that terrible past behind them to salvage whatever self respect they still have, they must answer the case before them.