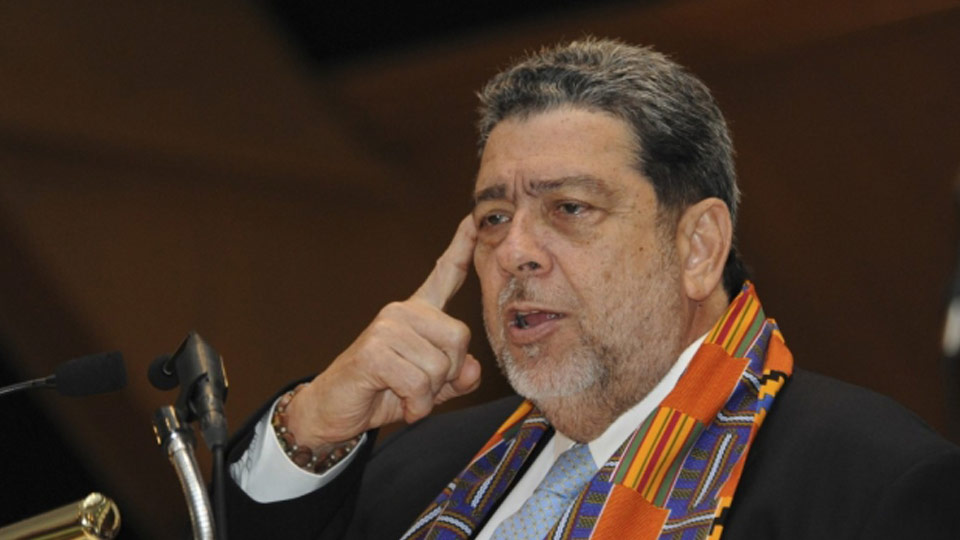 ADDRESS BY DR. THE HON. RALPH GONSALVES PRIME MINISTER, ST. VINCENT AND THE GRENADINES CHAIRMAN OF THE CARIBBEAN COMMUNITY 200TH ANNIVERSARY OF THE ABOLITION OF ON THE OCCASION OF THE THE TRANS-ATLANTIC SLAVE TRADE

I have the distinct honour and pleasure of addressing the Caribbean Community on the historic occasion of the Bicentenary of the passage of the Bill by the British Parliament in 1807, that abolished the Trans-Atlantic Slave Trade.

Given the overwhelming significance of this historic moment to us in the Caribbean, it is fitting that we pause for a moment to commemorate and to remember. We must never forget. So on March 25, 2007, and throughout the rest of the year in our many commemorative activities, we unite as a region and as a people, in a collective moment of reflection, as we remember one of the greatest tragedies in the history of humanity, which denied over 25 million Africans for over 400 years, the basic human right of freedom, the right to self actualization and for so many, denial of even their basic right to life.

As a region, we are collectively engaged in commemorating and paying tribute to all those who triumphed over the anguish of enslavement, of injustice and disenfranchisement, and who helped to bring about the abolition of the nefarious triangular trade that linked Europe, Africa and the Americas from the late 1400s to the late 1800s, in the trading and transportation of human cargo across the We observe a minute of silence on March 25 th , and engage in year-long commemorative activities as mandated by the Eighteenth Inter-Sessional Meeting of the Conference of Heads of Government, which was held in St. Vincent and the Grenadines, in February 2007, in memory of those who survived the horrors of the middle passage, the brutality and dehumanizing experience of slavery and the anguish of displacement from their homeland.

The Resolution acknowledges that the legacy of the system of slavery is “at the heart of situations of profound social and economic inequality, hatred, bigotry, racism and prejudice, which continue to affect people of African descent today.”

We recall their bravery, we recall their indomitable spirit, that sustained their struggle against the prevailing world order that discounted their right to identity, to citizenship and to develop as a people, as a society and as a continent. We remember the martyrs and leaders of the slave revolts; we honour the memory of Toussaint L’Overture and Henri Christophe in Haiti, Nanny of the Maroons, Tacky and Paul Bogle in Jamaica;

Codjo, Mentor and Present in Suriname. We honour Bussa in Barbados, Cuffy, Accra and Damon in Guyana, neg marrons Jaco and Bala from Dominica, Joseph Chatoyer in St Vincent and the Grenadines, and the host of others throughout the Caribbean and elsewhere who struggled for their freedom and thereby guaranteed the freedom of generations to come, of which we are currently the beneficiaries.

With the benefit of hindsight, we are able to see that the trans-Atlantic slave trade and the system of slavery, had a profound impact not only on the Caribbean, but on the world, as the economic, political and psychosocial conditions that developed during this period of world history, continue to be at the centre of international relations even Slavery, the slave trade and subsequently indentured servitude were essential elements of a system that generated wealth and economic prosperity for the European super powers, fueled the Industrial Revolution and an economic boom in Europe. Africa on the other hand, was plunged into a state of underdevelopment, social instability and dislocation, persistent poverty, and economic decline, so ably captured in the seminal work of another celebrated activitist scholar, Dr Walter Rodney. The effect on that continent of losing Africa’s strongest, brightest and best for hundreds of years is undeniably profound. We cannot afford to forget.

This occasion of the 200 th Anniversary of the Abolition of the Slave Trade in the British West Indies also presents many opportunities. It is a time to teach the younger generation of the region, the history, the lessons and the effects, and to ensure that we never again experience this tragedy in old or new forms. It is an opportunity to bring about reconciliation and healing for ourselves and for all the parties in Britain, France, Spain, Portugal, the Netherlands, Africa, South America and the Indian Ocean, among others, who share this experience. But the healing can only come after remembering and acknowledging our respective roles and our collective responsibility for the betrayal, for the atrocities and for the suffering that resulted from African genocide and enslavement. We will not forget.

As a region, we have led the way in focusing the attention of the international community on the Bicentenary, in the spirit of reconciliation and truth, by co-sponsoring a Resolution which was adopted by the 61 st General Assembly of the United Nations in 2006, which designated March 25, 2007 as the International Day for the Commemoration of the 200 th Anniversary of the Abolition of the Trans-Atlantic Slave Trade. A Special Session of the United Nations General Assembly will be held on March 26, at which Dr. the Hon.

Denzil Douglas, Prime Minister of St. Kitts and Nevis will deliver an address on behalf of CARICOM.

The Resolution, which was supported by an overwhelming majority of states, recognizes the slave trade and slavery as among “the worst violations of human rights in the history of humanity,” and recalls that slavery and the slave trade were declared crimes against humanity by the World Conference against Racism, Racial Discrimination, Xenophobia and Related Intolerance, held in Durban, South Africa in 2001. The Resolution acknowledges that the legacy of the system of slavery is “at the heart of situations of profound social and economic inequality, hatred, bigotry, racism and prejudice, which continue to affect people of African descent today.” The Resolution honours the memory of those who died through exposure to the horrors of the middle passage and in revolt and resistance to slavery, and recalls the Durban Declaration in emphasizing the importance of the “provision of remedies, recourse, redress and compensatory and other measures” aimed at countering “the continued impact of slavery and the slave trade” and restoring the dignity of the victims and their descendants.

By far, the most crippling effect of slavery and the slave trade has been the ideology and the legacy of racism, legitimized then by the Code Noir in the French colonies; and which is perpetuated in new and insidious forms in our contemporary world. We shall not forget. However, as we gather on March 25 th and throughout the rest of the year in churches, at public lectures, in schools and at ritual ceremonies of commemoration, on Emancipation Day and Independence Day, let us be reminded that we also have much to celebrate as a people. We celebrate our many accomplishments as a great Caribbean civilization that has triumphed over this great We celebrate our cultural diversity and the melting pot of races, cultures and peoples who have demonstrated to a divided, globalised world that we can live in peace and harmony. Out of the crucible of our painful past, we have created a neo-people, a model community, and a spiritual and cultural renaissance.

I am indeed grateful for this opportunity to greet the Community as we gather to reflect, to remember, to commemorate, to celebrate, and to act accordingly.