‘A Journey That We Have To Join Together’: 2 Dutch Women Confront Slavery’s Legacy 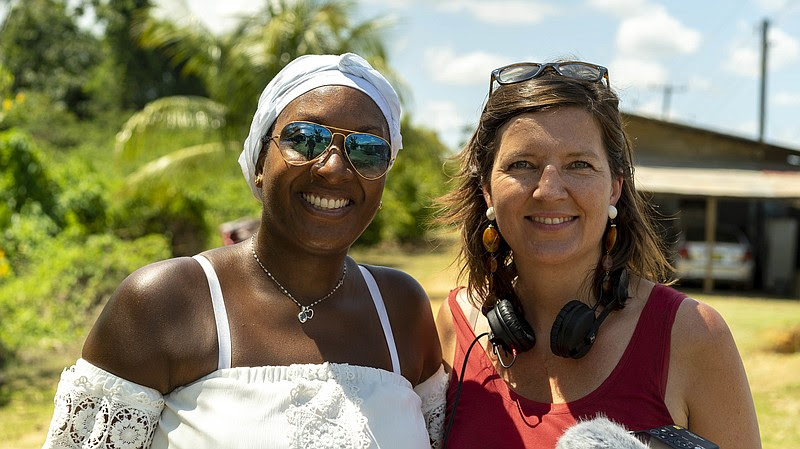 Peggy Bouva (left) and Maartje Duin traveled to Suriname together to visit a former sugar plantation once owned by Dutch nobility. Duin’s great-great-great-grandmother held a share in the plantation, where Bouva’s ancestors were enslaved. The two women documented their research into their shared, painful history for a podcast called “The Plantation of Our Ancestors.”

Peggy Bouva was at home in the Dutch port city of Rotterdam a couple of years ago when she got a call that fascinated her.

The woman on the phone, Maartje Duin, calling from Amsterdam, said she wanted to talk about slavery. Duin told Bouva that she had done some research into her own family history and found their families shared a connection: One of Duin’s ancestors had co-owned a plantation in South America where Bouva’s ancestors had been enslaved.

“This was the first time that I spoke with a white person about slavery and their connection with it,” says Bouva, a business controller who is Black and whose parents emigrated to the Netherlands from Suriname, a country bordering Brazil that was a Dutch colony for nearly 300 years. “I was curious about where this all would lead.”

Where it led was to two years of joint research that resulted in a popular, eight-part podcast the women co-produced and Duin hosted, delving into painful issues of the Netherlands’ colonial past that most of the country has avoided confronting. They hope the podcast, which has half-a-million listeners, will help the Dutch acknowledge painful chapters in history and contribute to national healing.

Bouva had grown accustomed to hearing white Dutch people praise the era between the 16th and 19th centuries, when their ancestors thrived as sea traders. Their wealth helped fund Amsterdam’s canal-side mansions and contributed to the Golden Age that produced Rembrandt and Vermeer.

The era also thrived on the slave trade. But Bouva’s schoolbooks barely mentioned that ships from the Dutch West India Company, financed by Amsterdam’s bankers, carried more than 600,000 Africans to be sold in the Americas. That seemed to be someone else’s history.

“Our teacher showed us the television series Roots,” she says, “as if slavery was only an American problem.”

Duin similarly remembers her own history teacher playing the series and largely skipping over any mention of the Dutch slave trade.

As the women dug into their families’ histories — and Dutch history — together, they confronted painful issues, such as the role of white privilege in a society that had long convinced itself that it was equal. They tackled the racist legacy of colonialism, what it means to apologize for slavery, what it takes to mend a society warped by slavery’s legacy.

They documented every twist and turn and turned their research into their podcast, De Plantage van Onze Voorouders, “The Plantation of Our Ancestors,” produced by the Dutch public broadcaster VPRO and the media production company Prospektor.

“What’s hardest for [white] people to acknowledge is that we live in a post-colonial society,” Duin says tells NPR, “and that white people have have profited off that system and that inequality is actually something we can do something about.”

“We wanted to show people that you can talk about this openly,” says Bouva, “even if it’s uncomfortable.”

The podcast has searing moments. Bouva despairs when she struggles to find details about her ancestors in the national archives in The Hague. She eventually finds their first names on colonial-era inventory lists, some “crossed off like objects,” she says, after they died.

She tells Duin that she doesn’t feel welcome in the Netherlands — the country where they were both born and raised — because the color of her skin makes her an outsider. “When they hear me talking on the phone, they assume I’m white,” she explains to NPR later. “But when they see me and realize my parents were not born in the Netherlands, they treat me differently. It feels cold.”

In the podcast, Duin is openly uneasy as she tries to figure out how much one of her own ancestors — a great-great-great-grandmother who had never visited Suriname — knew about the plantation she held stock in. She also admonishes herself for initially telling Bouva her enslaved ancestors had “worked” on the plantation.

“When you work, you get paid,” Duin says in the podcast. “They were exploited.”

The women travel together to Suriname to visit the old Dutch sugar plantation, now an oil refinery. Duin meets Bouva’s extended family, including an uncle who says he wants the Dutch government to apologize for slavery.

Prime Minister Mark Rutte has refused to apologize on behalf of his government for the country’s history of slavery, saying an apology would polarize society. Duin asks Bouva’s uncle if an apology from her, a plantation owner’s descendant, would mean anything.

It would, he says. He grew up hearing about how badly his ancestors were beaten.

“Sometimes I can even feel the whippings,” he tells her.

Something about the pain in his voice and eyes leaves Duin speechless and in tears.

She finds the words “I’m sorry” sticking in her throat.

“To say sorry fell so short,” Duin tells NPR. “That was such a small word for such a big tragedy. It felt more sincere to just sit with that feeling of sadness and not take it too personally.”

Bouva says she and her uncle weren’t angry or disappointed that Duin couldn’t get the words out. In fact, she says, the moment felt bigger than a verbal apology.

“Her sadness acknowledged his sadness,” she says. “It wasn’t about her, but about him.”

Amsterdam city council member Simion Blom says he was stunned when he heard the podcast.

He is related to Bouva and his ancestors were also enslaved on the sugar plantation.

In the podcast, Bouva and Duin address the racist legacy of colonialism more directly than most Dutch politicians, he says. Conservatives play down or even ignore it, he says, while liberals get caught up in their own feelings of shame.

“I cannot use feelings of shame,” he says. “For me, as a descendant of enslaved people, it’s about just telling the stories so we all know what the history is — and we all know how it is linked to our current society.”

Blom says he has seen this link firsthand. He was born in Suriname and moved to the Netherlands with his family in 1993, when he was 5. They settled in southeast Amsterdam, where the Dutch government housed families from former colonies starting in the 1970s.

Even in grade school, he wondered: “Why are all the people in my neighborhood poor? Why do you have a lot of broken families? Does society believe in us?”

The high-rises in Bijlmermeer, the district where he was raised, had originally been built as part of a futuristic development for middle-class white families who never showed up. The immigrant families who moved in instead remained isolated for years, and the area became notorious for high unemployment, crime and drug abuse. The area’s police chief once called it a “national disaster area.”

Its prospects have turned around in recent years, after government aid. It’s now an up-and-coming district, with 150 nationalities represented among nearly 90,000 residents.

But the scars remain, Blom says. He sees it in the district’s lower-performing schools and in how Black Dutch people are treated differently in a society that considers itself a model of equality. He cites a study that showed job applicants with non-Western names getting 30% fewer callbacks for interviews than those with Western names. And a privacy watchdog found this summer that the national tax authority — which has for years been embroiled in a scandal over wrongfully accusing parents of committing child benefit fraud — unfairly targeted citizens based on their holding double nationality.

Every July 1, Blom and his neighbors observe the day in 1863 when the Dutch freed those enslaved in Suriname, though they still were forced to work another decade on plantations for minimal pay to make it easier for white plantation owners to manage. The anniversary is called Keti Koti, which means “the chains are broken” in Sranan Tongo, a Creole language spoken in Suriname.

Blom sees the festival as a way for Black Dutch people to say “my culture, my background, is also part of Dutch identity.”

“It’s like there are two versions of colonial history in this country,” he says. “The Black version and the white version.”

One includes slavery, he says, while the other does not. If a Black person brings up slavery, “We’re accused of playing the victim. That’s not acceptable.”

Earlier this year, Blom and another city council member, Don Ceder, who also represents southeast Amsterdam, led a successful push for the Netherlands’ largest city to apologize for its role in slavery. Amsterdam once held a one-third stake in Suriname, where enslaved people harvesting sugar cane on Dutch-run plantations made Amsterdammers wealthy.

A majority of the council approved the apology. It’s now researching to whom the apology should be addressed: the Dutch citizens who are descendants of the enslaved, the citizens of Suriname and the Antilles — or all of the above.

It’s largely an effort to “reconcile with the past” and get to the real issues, says Ceder, an Amsterdam attorney and the son of a Surinamese father and Ghanaian mother.

“What does it mean to acknowledge that colonial history does, till this day, have some kind of effect?” he says. “How are we going to repair that?”

Dutch governments haven’t talked about those questions, he says, because the answers have to do with money.

“That’s where it gets sensitive,” he says. “That’s where people say, ‘Oh wait, so now it’s going to cost me something.’ That’s where the discussion starts ending.”

Not for Duin and Bouva. Their podcast’s final episode deals with reparations. Who should pay? And where should the money go? And how would reparations tackle institutional racism?

Karwan Fatah-Black, a historian at Leiden University who specializes in the Dutch colonial era, tells Duin that talking about reparations isn’t just about the money. It’s about acknowledging that slavery has warped society.

Speaking later with NPR, he says the most popular book about colonial history in the Netherlands “is very dismissive of the idea that there is a connection between historical slavery and present-day racism. And it talks in a very denigrating way about this history and about the memory of people of slave descent. So that’s the mainstream narrative.”

Duin and Bouva hope their podcast can help change that. Duin wants the Dutch to understand that the Netherlands can’t be a progressive society until it understand colonial history.

Bouva says acknowledging this is the only way to integrate Dutch citizens with roots in the colonies.

“If you don’t acknowledge that you’ve damaged someone, it’s difficult to heal,” she says. “And I think as a nation, this is a journey that we have to join together if we want to have a future.”