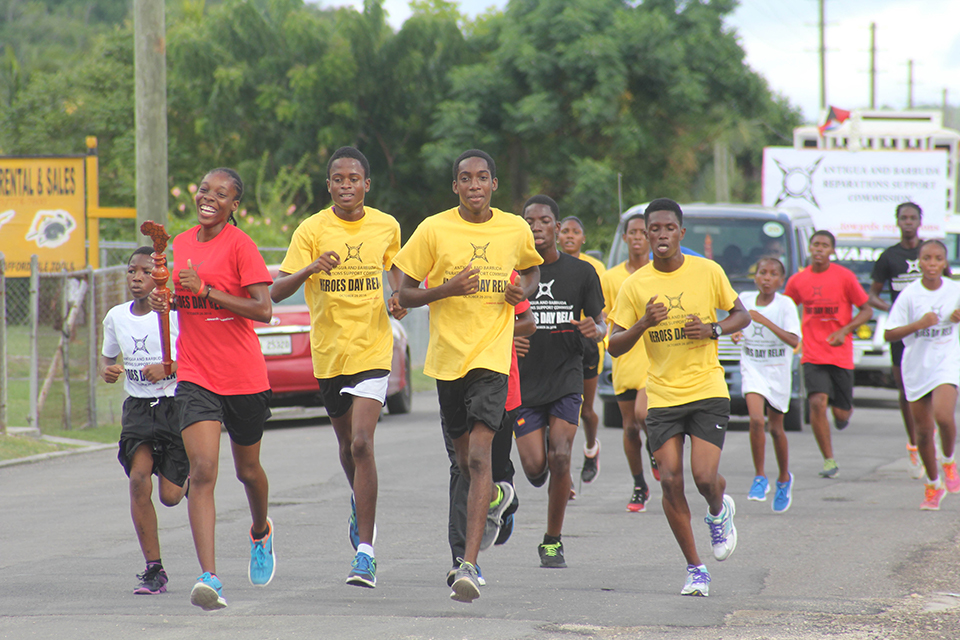 The CARICOM Reparations Baton – which had already crossed Barbados, Guyana and Suriname – was carried by athletes from the Sir Vivian Richards Cricket Stadium to the TOR Memorial School founded by Dame Nellie Robinson, the only female national hero – to Heroes Park where the tombs of Sir George Walter and Rt. Hon, VC Bird are located and finally to the King Court Tayki (aka Prince Klass) Monument. At each stop, the citation of the corresponding national hero was read by a student. The citation of Sir Lester was read at the King Court monument.

The baton run was launched at the Sir Vivian Richards Cricket ground with addresses from the Chairperson of the ABRSC, Dorbrene O’Marde, Minister of Social Transformation and Human Resources (with responsibility for Youth) Hon. Samantha Marshall and Minister of Trade, Culture and National Festival Hon EP Chet Greene. National hero Sir Vivian Richards was represented by his son Mali Richards.

An audience of approximately seventy students and teachers, selected from various schools, received brief messages about reparations, heard histories of the courage and achievements of national heroes, and were encouraged to strive for excellence in all their endeavours and passions. Also in attendance was a group of persons dubbed as ‘influentials’ who have made positive contributions to the on-going reparations discourse. Among them was Sis. Edith Oladele, chairperson of the African Slave Memorial Society and Bishop Kingsley Lewis of the Moravian Church.

The Prime Minister of Antigua and Barbuda Hon. Gaston Browne received the baton at the final stop of the Run and delivered the feature address – over the heartbeat sounds of Rastafari drummers – to an enthusiastic group of youth. There he emphasized the deep commitment of the Government of Antigua and Barbuda to the regional strategy in pursuit of reparations from European for hundreds of years of enslavement and colonial domination of African and Caribbean people. He urged nationals to enlist in that struggle and also in his Government’s vision of creating and ‘economic powerhouse’, noting as did the Minister of Culture earlier – that the labour of our forebears had already created such a powerhouse, unfortunately not in the Caribbean but in Europe. PM Browne encouraged youth to deepen their understanding of our history and culture and appreciate that the present struggles are aimed at ensuring a better world for them in the future.

The baton run is one of a series of events designed by the CARICOM Reparations Commission (CRC) to engage youth in the Reparations dialogue. Other events scheduled by the ABRSC in January 2016 include a Youth Forum and a Youth Rally. The CRC working through it national commission members continues to fulfill its main mandate to “establish the moral, ethical and legal case for the payment of Reparations by the Governments of all the former colonial powers and the relevant institutions of those countries, to the nations and people of the Caribbean Community for the Crimes against Humanity of Native Genocide, the Trans-Atlantic Slave Trade and a racialized system of chattel Slavery.

Chairperson of the ABRSC O’Marde hailed the event as ‘a major success’ and pledged to make it an annual event. He was high in praise of the young persons, especially the athletes who participated, thanked the Prime Minister and two Ministers of Government for inspirational addresses and shared the Commission’s appreciation to those persons and organizations that contributed. He highlighted contributions from the Antigua and Barbuda Royal Police Force that provided security and escort, the Antigua Defense Force, the Antigua Red Cross that was in attendance, the Division of Sports, the staff of the Ministry of Culture and that at the Sir Vivian Richards Cricket Ground, the Nyabinghi Drummers and a host of service providers – printing, catering, documentation and sound technology. He had special thanks and praise for the Media – primarily the ABS Radio and TV and the Observer Radio – which promoted and covered the event.

One thought on “Press Release”