What We Owe the White House Slaves: $83 Million 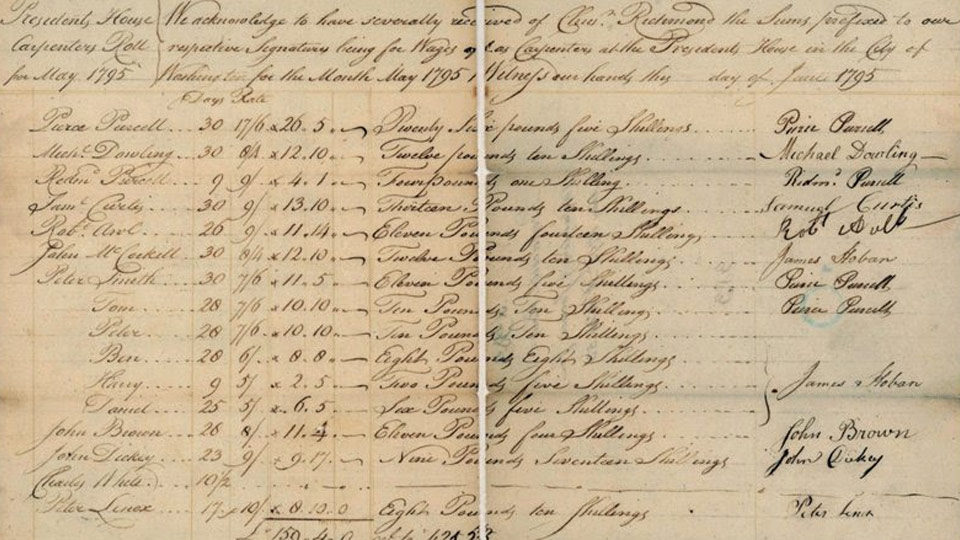 The slaves who helped build the White House had no surnames in the official documents, having the same legal status as dogs. Those listed above—and many more—labored from dawn to dusk, six days a week. They felled the trees. Hewed the logs. Quarried the stone. Made brick. Muscled it all to the site. Dug the foundation. Set to work as sawyers, stonemasons, carpenters, and laborers.

For these labors, their owners—or the middlemen who had leased the slaves—were paid as much as $60 a year. The slaves themselves got not a penny.

Fairness demands that the government pay the descendants of the slaves for their labors.

That is not reparations.

That is simply paying people honest wages for honest work.

And this was not just any construction job.

The minimum should begin with the $60 a year that was paid to the owners as what each slave’s work was worth. The white workers at the White House received markedly more.

A 5 percent interest rate would seem at the lower end of reasonable.

Others might contend that the slaves should benefit from the same 20 percent annual return that the $60 roughly constituted for the owners when compared to what they generally paid for a slave in the first place.

That hardly seems extreme when compared to the returns from some of the modern hedge funds.

If that number is right, we cannot afford to pay even one slave at the rate a Wall Street greedster would expect.

Of course, the money would have to be taxed, like any honest wages. There would remain the hard part, which would be tracking down the descendants without the aid of the slaves’ given names.

But the owners are known, and that would be a promising starting place. William Beall owned Davy, Frank, and Newton. Ignatius Boon owned Moses, Charles, and Jacob.

The other owners included James Hoban, who won a competition to design the White House and oversaw its construction. He also pocketed $60 a year for each of four slaves: Peter, Ben, Harry, and Daniel. He bequeathed the slaves, along with his horses and the rest of his sizeable estate, to the surviving of his 10 children at the time of his death. His immediate heirs are said have sold the slaves at a tidy profit.

During the Civil War that freed all slaves, Hoban’s son, James Jr., chanced to see a Philadelphia man stumble and fall in the street after taking ill with malaria. The son brought the man into his Washington, D.C., home, as the hospitals there were filled beyond capacity with battlefield casualties. The man was Eustace Bouvier and his wife, Louise Lindsay Bouvier, subsequently sent the Hobans a silver pitcher as a token of her gratitude.

A century later, the great-great-great-grandson of the man who designed the White House was thrilled to see the Philadelphia man’s great-great-granddaughter had moved into it as the new first lady. James Hoban Alexander added a grand twist to a family tale by presenting Jackie Kennedy with the silver pitcher.

A photographer captured the presentation at the White House. There was much talk about James Hoban’s design and how he had been inspired by a building in his native Ireland. But there was no mention of the slaves who had done much of the actual building, those including four that the celebrated Hoban had disgraced himself by owning.

Imagine how ecstatic the slaves would have been to see the present first lady move into the house they constructed from the foundation up. Michelle Obama got the whole world thinking about the slaves when she spoke, at the Democratic National Convention, of what it meant to her to live in a house built by slaves and watch her daughters play with their dog on the lawn.

Her speech was proof that America has never been greater.

There remains the question of the unpaid wages for honest work done on the house where the next president who moves in may do so not with a first lady but with a first fellow.

Either way, a debt is a debt.