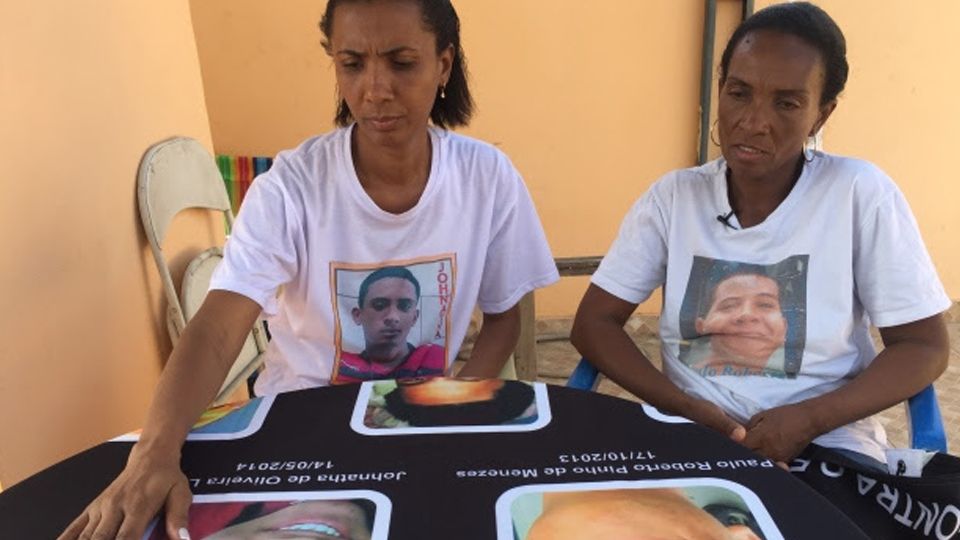 Every week or so, Ana Oliveira and Fatima Pinho meet on the rooftop deck of Oliveira’s modest home in the Rio favela of Manguinhos. They’re drawn together by the faces stenciled on a large black cloth — smiling faces of young black men. There are dates written underneath. Under her son Jonathan’s face is “May 14, 2014.”

“He left the house to deliver a cake to his grandmother, beautiful and smiling and full of life,” Oliveria says.

He never came back. On his way home, a small crowd was arguing with the police. Oliveira says several officers fired to disperse the crowd, and her 17-year-old son was shot in the back.

“This police officer, as well as many others that kill young black kids from the favela, are assured of impunity,” Oliveira says.

There are almost a dozen faces pictured on the cloth, kids from just this one favela, killed by police. Right next to Jonathan is a picture of Pinho’s 18-year-old, Paulo.

They have one goal: to repress the poor black population

Three years ago, after hearing he’d been beaten that afternoon by police, Pinho went looking for him. She found him bleeding in an alley. She says Paulo took a breath and died in her arms.

“It was like he was waiting for me,” she says.

According to Amnesty International, over the last 10 years, police were responsible for 16 per cent of the killings in Rio and 79 per cent of those victims were black.

Oliveira says police repression has increased since the Olympics began.

“As part of these mega-events, a growing number of police are filling the favelas,” she says.

From a balcony, Carlos Goncalves points out trouble spots in his neighbourhood, an often violent collection of favelas known as Mare. He says if you live here and you’re black, the police are as dangerous as the criminals. Two of his brothers, he says, were killed by police.

“They have one goal: to repress the poor black population,” he says. “And usually that repression means death.”

Black activists in Rio often do organize protests, like one that took place last year when police were caught on video placing a gun in the hand of a teen they’d shot, 17-year-old Eduardo Victor.

“Here we cry and cry, and the authorities don’t listen to us,” she says.

Recently, Brazilian activists saw how much attention Black Lives Matter was getting in the U.S.

So they wondered… would that movement work in Brazil?

In mid-July they invited several American members of Black Lives Matter to Rio to put the spotlight on police violence ahead of the Olympics. They met with activists like Oliveira and Goncalves, and held events they dubbed “Julho Negro” — Black July.

One of the first things Goncalves learned from the Black Lives Matter members shocked him: white people can actually help.

But the Brazilians realized they have many challenges American activists don’t have to contend with.

Most black Brazilians are very poor, Goncalves says, and the lack of public transport makes it hard to organize. He admits the racial dynamic is different as well; most of the police who kill black people are, themselves, black.

“Most of the officers are from the favelas, but the officials are mostly white from higher classes,” Goncalves says. “This racial hierarchy produces the racism wherein you see black police killing young black men.”

But he believes if the movement is successful, Brazilians may face the same problem Black Lives Matter has experienced in the U.S.: a right-wing backlash. Goncalves says Brazil’s new interim president is passing laws against protests that disturb the peace, and that will affect their efforts to mobilize large demonstrations.

“The Black Lives movement will be classified as terrorism,” Goncalves says.

Their priority now, he says, is to build more bridges with American allies — and build them fast.

Oliveira and Pinho run their hands over the cloth and rearrange it so their boys are looking back at them. The two mothers expect there’ll be more faces to add by the time they meet again next week.